As many of you already know, Boise’s only flying bridge belonging to Idaho Foundation for Parks and Lands (IFPL) made its triumphant return flight on March 25, 2019.  Once again, it proudly spans the south channel of the Boise River, re-connecting the Greenbelt across Plantation Island.   Not only was the bridge restored to its original pilings but the path between the two Plantation Island bridges has been repaved.

The Plantation Island bridge provides a crucial link between the Boise River Greenbelt, the Garden City Greenbelt and a portion owned by Ada County in that location. Following the Snowmageddon Winter of 2017, extremely high flood water on the Boise River rose to more than 9,000 cubic feet per second, undercutting the supports of the steel pedestrian bridge.
Engineering experts recommended temporary removal of the bridge to avoid losing it to flood waters and seeing it flow downstream, where it could have caused a disaster at the Glenwood Bridge. The Plantation Island bridge was removed by crane on April 3, 2017.

After the bridge was removed, the Idaho Foundation for Parks and Lands worked to raise sufficient funds to repair the areas around the bridge footings on Plantation Island and restore the bridge to its original location.
A total of $200,000 was needed for the project. The Foundation raised $117,000 from more than 170 private donors and multiple partners to cover local match requirements, and FEMA funds came through to cover the balance, officials said.
The Plantation Greenbelt steel bridge was donated to the Foundation by the late Ron Yanke and his wife, Linda, and placed into service in 1990. Yanke Machine Shop built the bridge to benefit the community. There were no issues with the bridge use until the epic flood flows occurred in Spring 2017. (continued)

“Looking back, that was an extremely smart decision to remove the bridge and save it for future use,” said Judy Peavey-Derr, a former Ada County Commissioner and board member of the Idaho Foundation for Parks and Lands. “The Foundation has been working very hard over the last 2 years to raise sufficient funds, apply for Federal Emergency Management Agency (FEMA) funds, and work through environmental engineering and permitting issues to restore the bridge to its original location.

“We are so excited to share the news with our community that we will be putting the bridge back in place for the public to enjoy. It’s such an important nexus for Greenbelt users, bridging the Greenbelt pathway from the north side of the river to the south side as it continues to the city of Eagle and beyond.” 2017 Boise River flood damaged to embankment on the Plantation Island 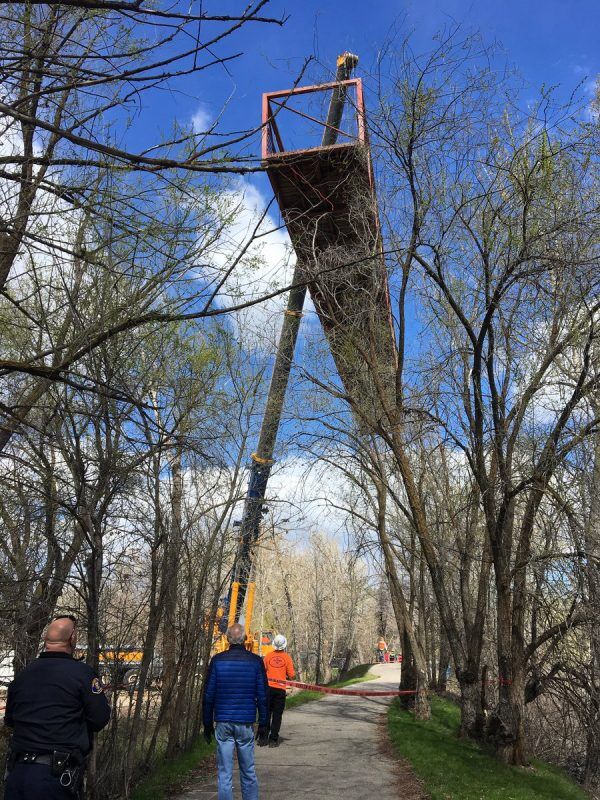 April 3, 2017 the bridge was removed for safety reasons